To enable a better comparison between Cigarettes and Cigars and loose tobacco in terms of per capita consumption and price per unit, the latter's volume is denoted in 1.000 kgs (total consumption) and grams (per capita consumption, price per unit). Due to a growing health consciousness of consumers and increased regulation (such as through advertising bans in Europe) the use of tobacco in Europe has been decreasing in recent years and volume growth has almost exclusively been realized in emerging markets. The five most important producers worldwide are the China National Tobacco Corporation, Philip Morris International (PMI), British American Tobacco (BAT), Japan Tobacco International (JTI) and Imperial Tobacco.

in the Tobacco Products market in million US$ in percent

The “Revenue” box shows the forecasted revenue development of the selected market (market segment, region) in million US dollars for each year.

A definition and detailed explanation of the displayed markets can be found here.
×

in the Tobacco Products market in US$

Reading Support The average revenue per person in the market for Tobacco Products amounts to US$111.33 in 2020.

The "Average Revenue per Capita" box shows the average market value of the selected market (market segment, region) per person in US dollars for each year.

Tobacco products have been the focus of tightening regulations for decades. Higher taxation and increasing health awareness among consumers have reduced smoking rates and volume consumption significantly in the past. Over the forecast period, a certain stabilization of these losses is expected to happen. Most growth in the sector, however, is attributable to novel, risk-reduced products that can broadly be classified as vaping products or e-cigarettes (e.g., Juul) and as heat-not-burn products (e.g., IQOS).

in the Tobacco Products market in percent

Reading Support 1.0% of off-trade consumer spending on food, drink and tobacco products will be attributable to online retail by 2023.

The “Volume” box shows the apparent consumption of the selected product (market segment, region) in millions for each year.

in the Tobacco Products market in pieces or grams

Reading Support In the Tobacco Products market, per-capita consumption of cigarettes and cigars is measured in sticks whereas smoking tobacco is measured in grams.

The "Average Volume per Capita" box shows the average volume of the selected market (market segment, region) per person for each year.

in the Tobacco Products market in US$

The "Price per Unit" box shows the average retail value per unit in the selected market (market segment, region) in US dollars for each year.

in the Tobacco Products market in million US$

The “Revenue” tab shows a comparison of revenues for the leading economies in the selected market (market segment, region) and year.

A definition and detailed explanation of the displayed markets can be found here. ×
XLS Download

The following Key Market Indicators give an overview of the demographic, economic and technological development of the selected region on the basis of general KPIs. The calculation of Statista’s Market Outlook is based on a complex market-driver logic including over 400 region-specific data sets.

The Tobacco Products market is built on resources from the Statista platform as well as on in-house market research, national statistical offices, international institutions, trade associations, companies, the trade press, and the experience of our analysts. We evaluate the status quo of the market, monitor trends, and create an independent forecast regarding market developments of the global Tobacco Products industry.

Tailored to your search demands

For the Tobacco Products market, our analysts create reports with detailed comparisons and important background information. Get an overview of trends and key players and consult comparisons of the focus regions USA, China, and Europe. 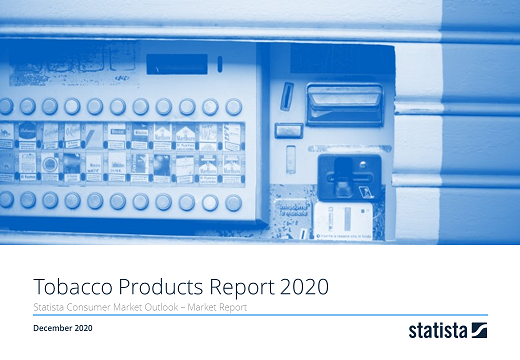 Here you can find more studies and statistics about "Tobacco Products".

These markets could also be of interest to you

Discover other market segments and categories related to your topic

The data source is specified individually for each data set. You can find the source in the data box in the lower left corner.

You can find further source information in the methodology section.